You are here: Home1 / Brussels 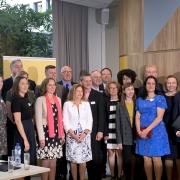 The German Australian Business Council joined our sister organizations as part of the Australian Business in Europe network (www.abie.eu) to host Australia’s Chief Negotiator for the EU Free Trade Agreement, Alison Burrows, as she delivered a Special Briefing on the status of the negotiations along with a distinguished panel including Ambassador to the EU, Justin Brown, Austrade’s European General Manager, Dan Tebbutt and European Australian Business Council CEO, Jason Collins.   The event was attended by ABIE members from all over Europe including the UK, France, Belgium, the Netherlands, Luxembourg, Bulgaria, Spain and the Czech Republic, together with representatives of several Australian-based business associations and industry groups and Australian Federal and State governmental agencies. The ABIE network is a collective of organisations across Europe and Australia collaborating to develop and promote business relations between the two regions. 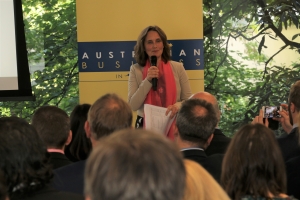 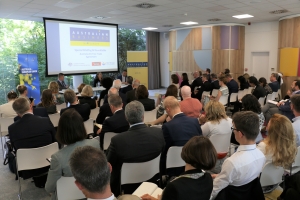 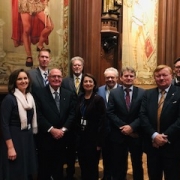 German Australian Business Council Board Members, The Hon. André Haermeyer and Sabine Pittrof attended the EU-Australia Senior Leaders Forum in Brussels. Sponsored by the EU and supported by the Australian government, the Forum brought together European and Australian leaders to discuss a wide range of topics concerning today’s world, ranging from geo-political challenges to digitalisation, environment and the proposed Free Trade Agreement between the EU and Australia. The Forum provided an excellent opportunity for leaders from both continents to exchange information and learn from each other’s experience.

The photos show Board Members with Patron emeritus David Ritchie (below) and a group shot of the German delegates to the Forum in the Brussels Town Hall (cover photo). 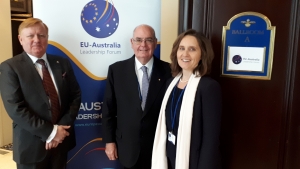