Blog - Latest News
You are here: Home1 / The Australian Ambassador receives the Grand Cross of the Order of Merit... 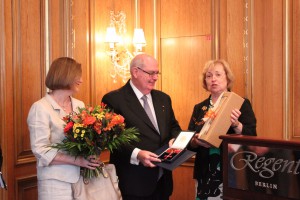 We would like to congratulate our Patron H.E. David Ritchie AO on being awarded the Grand Cross of the Order of Merit of the Federal Republic of Germany. The Australian Ambassador received the award in a formal ceremony on 5 July by the Minister of State in the German Foreign Office, Professor Maria Böhmer on behalf of the President of the Federal Republic of Germany. H.E David Ritchie AO was thanked tremendously for his years of service in Germany in advancing bilateral relations between Germany and Australia, including playing a significant role in the German-Australian Advisory group, Böhmer stating “You are a valuable and highly regarded partner, but also a good and close friend of the Germans.”