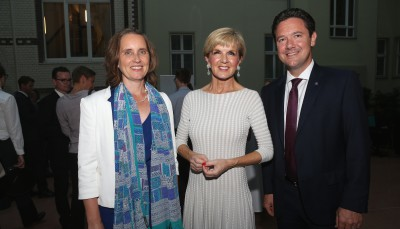 At the occasion of the Minister Julie Bishop´s state visit to Germany, the Australian Embassy in Berlin hosted an evening reception on 6 September which was attended by several GABC members. The Minister led an Australian Government delegation to attend the first German-Australian “2+2” consultations. This new format brings together the two country´s respective Ministers for Foreign Affairs and Defence and was attended by Minister Julie Bishop, the Australian Minister for Defence, The Hon Marise Payne, and their German counterparts Federal Minister Frank-Walter Steinmeier and Federal Minister Ursula von der Leyen.

In her speech to the evening reception´s guests, Minister Julie Bishop also announced the program of the 2017 Australia now initiative. This year-long series of predominantly cultural events seeks to highlight Australia´s creativity and power of innovation. Dubbed a “celebration of Australia´s culture in Germany”, the program will raise Australia´s profile in Germany and highlight the country´s cultural richness and diversity. 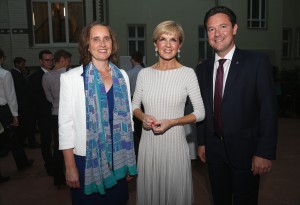 Julie Bishop, Foreign Minister of Australia, with Board members of the German Australian Business Council, Sabine Pittrof and Evangelos Kotsopoulos.

Sonic Healthcare expands in Germany and invests into innovation